Been there, done that (didn’t get the t–shirt).

The Berlin Marathon has come and gone. My seventh full marathon and my third of the six Abbott World Marathon Majors – halfway there!

The adventure started last year, probably just days after finishing the Wineglass Marathon. I was riding a high and my friend Kristin asked me what’s next. She seemed interested in doing a full and when I said: “perhaps Berlin? (wink wink)” she replied yaas! Kristin had recently moved to Ottawa and the thought of reuniting in Berlin sounded like a fabulous idea. We casually mentioned this crazy plan to our friend Jenna and she said: “count ME in!” so we submitted our names into the lottery. But sadly, as with most big races, the lottery can be a pain – we entered as a team which meant we’d either all get in or none of would and guess what, we didn’t get in. After a bit of googling and whining, we found a travel agent that had guaranteed entries if we committed to booking our flights with her and just like that, we were back in the race!

Time to train. One thing I did which made a huge difference in the way I run was hiring a coach. A friend of Jenna’s who owns New Leaf Endurance signed us on a gave us a week-by-week plan offering feedback and advice with each run. It was similar to other plans I’ve used but having everything recorded, examined and Strava’d made me much more accountable. Tempos, intervals, easy effort, hills, etc. were things I never really focused on so this was a great test. It was also a treat to do most of the long runs with Jenna (for my other six marathons, I did all of my running alone with the exception of a few biking support friends). Despite this all, training, however, was rough. My body was a big jerk all summer (my butt hurt so much, I could barely walk) but a little physio and a lot of stretching managed to get me through it, only missing a solid week of running in July.

Goals. Of course I wanted a personal best (3:45) and of course, I want a Boston qualifying time (sub 3:43) but mostly I wanted to enjoy Berlin. The New York City Marathon should have been an amazing experience but I didn’t enjoy it because my race did not go as great as I had hoped. This time, I really wanted to focus on a good run and be realistic about the size of the race and the distance we were traveling. As training wrapped up, I was even less interested in a PB and BQ and just hoped to make it to the finish. My body did not feel great (hips, lower back, a rolled ankle mishap) but I kept my concerns on the down-low and stocked up on Ibuprofen… I knew I’d be lucky to get a sub-4 hour and just hoped for the best, after all, a 42-kilometer tour of Berlin is still pretty cool, even if it’s walking not running!

We arrived in Berlin on Thursday giving us a few days to adjust to the five-hour time change and an opportunity to explore the city. There were two short runs before the race and it was a great opportunity to see the neighborhood and shake-out the legs. 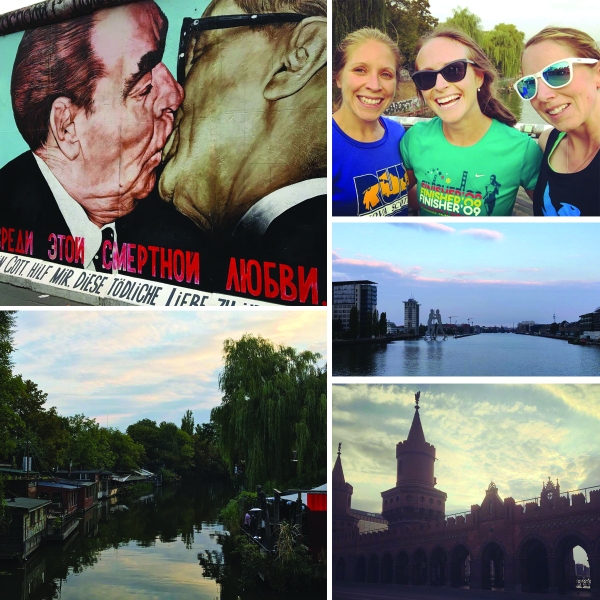 We visited the race expo and picked up our bibs and there was even a Nova Scotia reunion with a quick photo op. 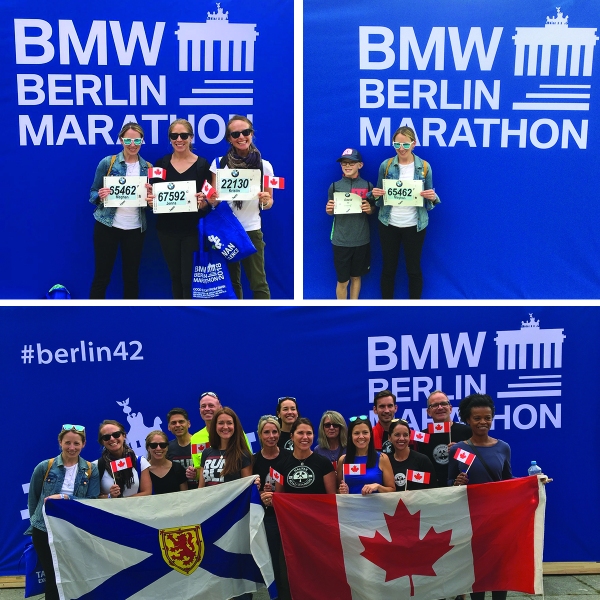 On Saturday, there was a mini-marathon for the kids. Jenna and Kristin’s boys ran in the age 4 group and David did an 800-metre dash in the 9-10 age group, placing third. He was pretty stoked.

Race Day. Because of our submission times, we were all slotted in different start blocks which sucked but since Jenna and I ran all summer together, I bumped back to her block and decided to run together. We run very similar and knew we could give each other a sub-4 finish. It’s a surreal experience to know you are running in a race with the likes of Eliud Kipchoge and Gladys Cherono but it’s even more insane to know there are +40,000 other people running around the city just hoping to have a great day.

Our block started at 9:45. Already sunny and about 11 degrees which is pretty decent but a lot warmer than last year’s 1 degree start at the Wineglass. Our plan was to hold a 5:20-5:40 average pace and avoid water stops for the first half (we carried water) and I must say we did a really good job and maintaining this pace. I knew my parents (who have been at almost all of my big races! xox) would be on the sideline around 7 km and there they were. All of the kids and husbands were at the 13 km sideline and my parents, aunt, and uncle were at 15 km. Things were going great and the course was beautiful and loud – so many drums and cheerleaders and non-stop spectating. 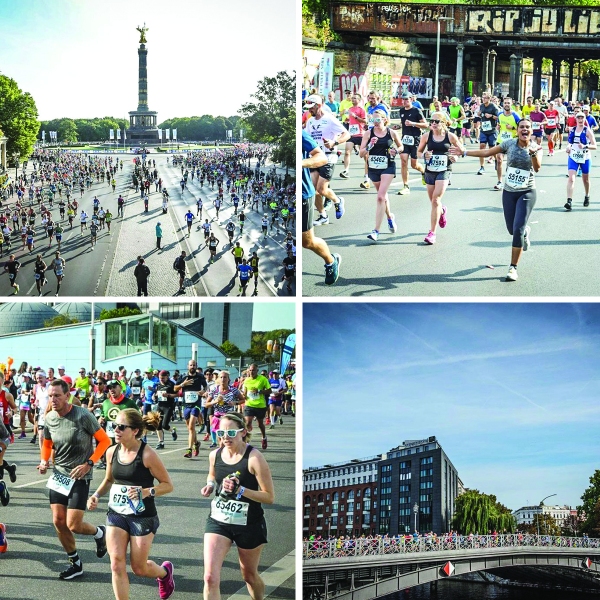 Just past halfway, our water bottles were empty so we decided to start using the water stations. They were INSANE – plastic crunchy cups, pushing, shoving, total chaos and then it happened… around 25 km I lost Jenna. I thought she was behind me at the water station so I stopped and waited… then ran, then stopped, then ran. With no luck, I realized I had to move on and finish alone. I picked up my pace again and hoped she was okay. I’m not going to lie, I lost my oomph and was out of sorts but I just kept moving forward. When I saw our family at 36 km I frantically yelled: “have you seen Jenna!” and they replied that she was ahead… what?!? My initial reaction was to speed up but then I realized that was dumb, I still had 6 km to go and I had to run my own race.

I moved along at a decent pace but I was hot. The temperature warmed up a lot and I grabbed two cups at every station, pouring one over my head and drinking the other. I was a soggy mess but once I made the final turn and saw the Brandenburg Gates, I knew it was almost over. 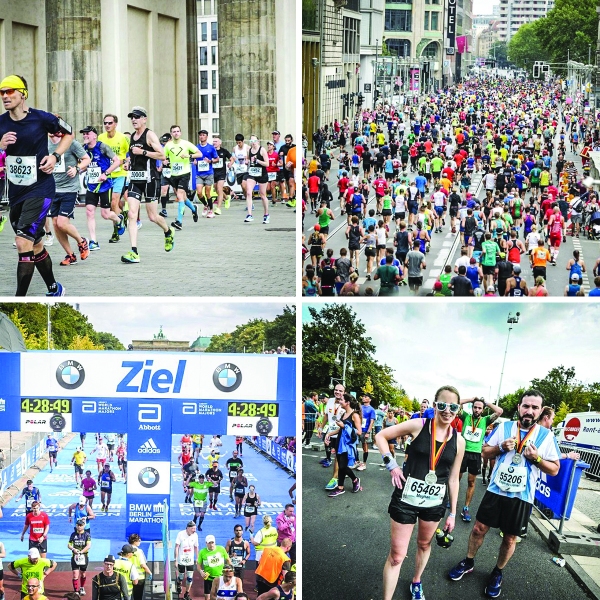 My final time was 3:56:19 – once second faster than Chicago, making it my second fastest marathon. I’ll take it! I waddled my way to the family waiting area and found Jenna. I was so excited to hear she finished in 3:54 and then Kristin came and she finished in 3:58!  Let me just say, these two girls are super-strong, both having just had their second babies and deciding to train for a marathon while working and raising two kids under the age of five is amazing. 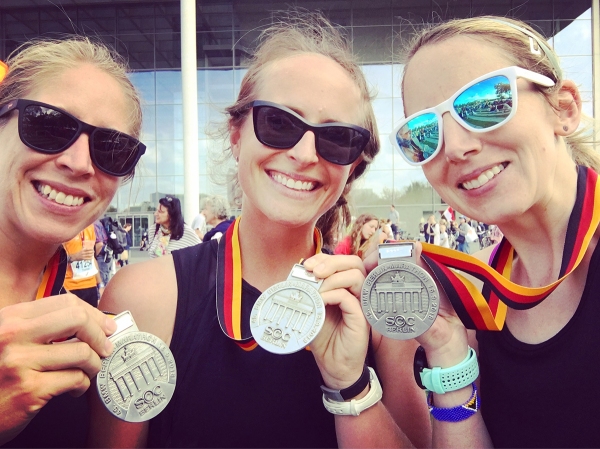 World records were broken that day but so were PBs for these two and I could not be more pleased.

Looking back at my stats, I am most happy that we kept a pretty consistent pace. I can easily see when I slowed down and waited, and near the end, I can see all of the water stations stops but things never got out of control. The Berlin Marathon is a beautiful course and the crowds were thick the whole way. The finish is the prettiest yet but my only complaint is there’s NO FREE T-SHIRT. Common, at least give us that for the money we paid.

So, what’s next? I’m ready to move on to the next adventure: A spring marathon (#fortybeforeforty). I think I’ll dial it back and do smaller race but right now, my goal is to work on adding some swimming into my life.

Go BIG or go home in the BIG APPLE! 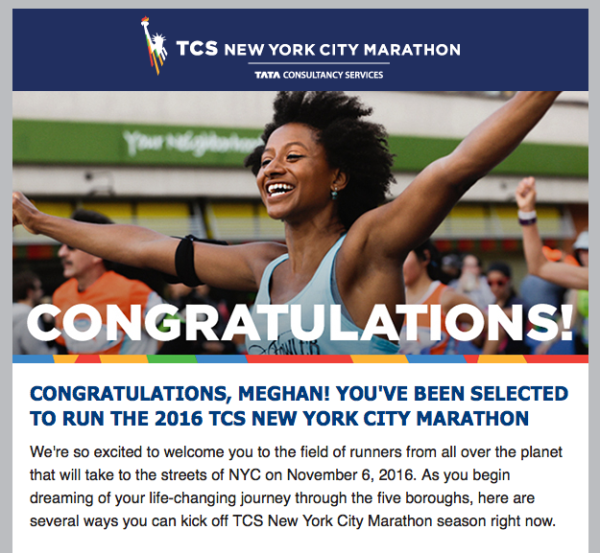 I’m relieved to say, it was actually Mike who convinced me to register… After the excitement of Chicago, I thought I’d chill-out this year but the NYC marathon has been on my running bucket list so Mike said what’s the harm in trying? (Like Chicago and other big races, it’s a lottery which I tried and failed at three times before so I think he assumed it was not going to happen). Hah! I’m in.

Convo with Mike:
Me: I got in! This will make 2 out of 6 for the World Marathon Majors
M: Awesome, what are the 6?
Me: Chicago, New York, London, Berlin, Tokyo and Boston … (Boston you qualify based on time, it’s not a lottery)
M: Well, you can at least try for the first 5…

No plans have been set in place but I am pretty excited! Marathon five + five boroughs = dreamy.

What about you – have you singed up for anything lately?

psst. Sadly, the NYC marathon lottery closed so I can not invite you to run with me however it is not too late for Chicago. Best.Race.Ever. I found this video yesterday of last year’s race and it gave me goosebumps… I was there!