Do you eat meat? Why?

It is rare to get asked that but when you don’t eat meat, people ask all the time.

Why? Don’t you miss bacon?

I stopped eating meat over ten years ago – mostly as a personal dare. I was surrounded by family and friends who were vegetarian and I wanted to see if I could do it. In all honesty, it hasn’t been hard. Sure, boxing day sucks but I’m happy to throw a veggie burger on the barbecue and hand over my diner breakfast bacon to Mike. #luckyguy

Once I got in the groove, the thought of eating chickens, pigs and cows grossed me out. Don’t get me wrong, I have no problem with others eating meat – and at times, I think I maybe should too (weak + the shakes + tiredness + frequent blood donor reject + carboholic + lazy with legumes) – but I am just not willing to go back.

To be clear… I am a lazy-half-ass vegetarian. Could I go vegan? Hell no! Eggs and cheese are my favourite. I went back to eating occasional seafood when I was pregnant with David (low blood pressure and iron + an emergency trip to the hospital can shake you up). I figure it is better for the economy to eat seafood in Nova Scotia so I do – just don’t make me boil a lobster. I wear leather but I make a conscious effort to buy products that are not tested on animals. I respect the local movement but shop online. I occasionally eat poutine and don’t question the gravy. I love gummies (are they still made with gelatine?). I don’t buy lard or meat stock but if meat lands on my plate, I happily push it aside and move on.

When my mom was in her twenties she was a vegetarian. It was the seventies and she was down with the cause. She has said many times it was much harder back then and I totally get it… we are spoiled with countless online resources and cookbooks, not to mention FAUX MEAT everything. If you dare.

So as easy as life as a vegetarian is in 2016, I can’t help but notice a new trend in Halifax Restaurants: Less meatless options than before and bacon everything!

To prove it, I thought it’d be fun to share a few menus I have found and make comments on why I’m tired of doubling up the appys.

Above: LaFrasca Cibi and Vini – only one pasta, one pizza and two appetizers (none being salads) and no main dishes. Ordering ravioli always makes me nervous – sometimes you only get 4! Try rationing four ravioli squares over an hour long dinner. It’s just sad.

Above: Black Sheep – Brunch all day. Cocktails and small plates at night. I’ll try the Veggie Hash please but what I really want to know is WHERE IS THE VEGETARIAN EGGS BENNY!?! 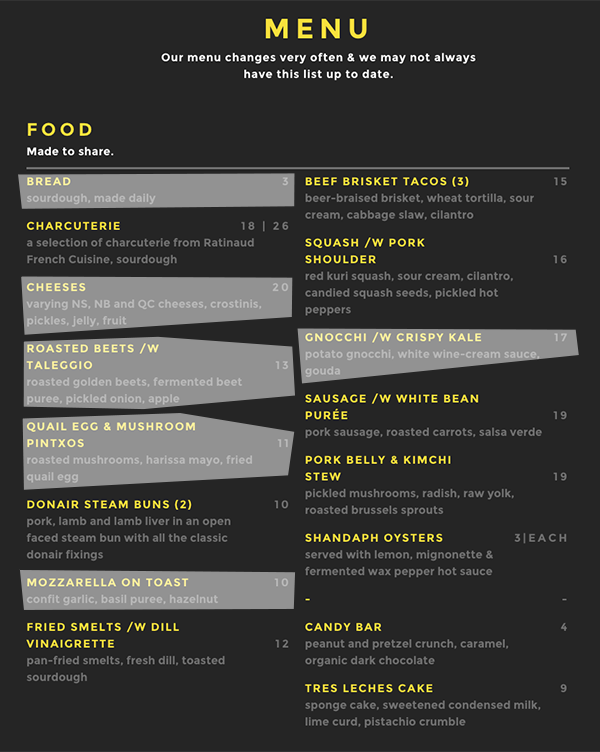 Above: Field Guide – A small restaurant in the North End of Halifax, Field Guide is dedicated to bridging the gap between diners and their food through an open concept kitchen and passionate service. Placing a big focus on supporting local farmers and producers, featuring NS craft beers and serving up some of the best cocktails around, Field Guide is a place to gather. $10 for cheese on toast! I actually got this one time and shared it with my friend. Suckers. I must admit, I have usually ended up at Field Guide for the drinks, not the food so I am eager to go and try the Gnocchi. Quail eggs freak me out.

Above: Battery Park Beer Bar and Eatery – Craft beers and small plates, designed for sharing. My friends (3 vegetarians) went here and had the nuts… This menu does not lure me to the Dark Side.

Above: Lot 6 Bar and Restaurant – Small plates, big flavour. I went here with 7 others – they all ordered from the large plates and I had two appetizers and was cranky. 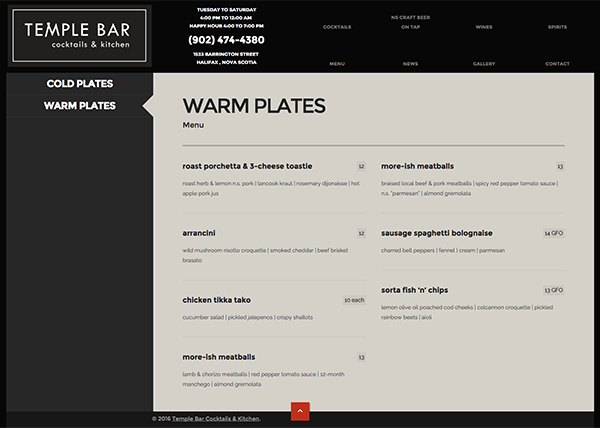 Above: Temple Bar Cocktails & Kitchen – I’ve gone twice. As you can see, there are zero warm plates for vegetarians… I’ve had the cheese plate twice… The drinks are great.

Do you eat meat? Are you loving the current bacon obsession?

I asked a few of my friends and family why they were/are vegetarian and now I’d love to hear from you.

“A very long time ago (too many to think about), I stopped eating meat and fish for about a two year period. I’d like to think my decision was for good reasons such as animal welfare and health, but truthfully, although that may have been part of it, I believe it was mainly because I was a very poor university student living with a friend who by that time had been (and still is) vegetarian for a number of years. My first professional job with NS Environment involved a lot of travel and a lot of eating out. At that time there were essentially no “vegetarian items” on menus so you simply ordered whatever without the meat or fish. Grilled cheese sandwiches (in fact most) were were made with processed cheese – you get the picture. Anyway after several months started to crave meats and one day, I just gave in – am very supportive of the vegetarian diet and always conscious of restaurant menus. I agree that the food industry seems to be more focussed on gluten-free choices – somewhat unfortunate in my opinion…” – Theresa (my mom)

My mom and older sister Erin

“This sounds lame but I always knew I would be a vegetarian. I didn’t, however, make much of an effort to switch to a vegetarian diet until university. The meats served at the dining hall started to gross me out. I’ve been vegetarian for almost 20 years now. Since I enjoy cooking it’s not hard to eat at home but eating out is still a challenge. I don’t think it’s just Halifax – almost every restaurant I go to has such limited vegetarian choices. More times than none its not even a choice – it’s only one meal. It vexes me that restaurants are more willing to provide lots of gluten free options but not vegetarian options. Although I’ve been raising Sam and Margaret vegetarian I’m thinking of introducing meat into their diets because of the challenge of eating out when there are so few vegetarian options” – Erin (my sister)

” I became a vegetarian because I felt it wasn’t right that something died so I could eat – especially as I didn’t need meat to survive and could do just as well on alternative sources of protein…Vegetarianism is on the increase in the UK – as is flexitarianism (cutting right back on meat and having meat free periods). Maybe it’s not the same trend in Canada?” – Rachel (my sister-in-law)

“I temporarily became vegetarian after I paid for and watched a goat be slaughtered whilst on a camel trek in India. The next day i had serious bathroom issues. Two years later, I got drunk, smelled hot dogs and sausages on the bbq, and had an amazing meal. I love vegetarian options, making vegetarian meals, and making fun of vegetarians….but I love my medium rare steak more!” – Jill (my sister)

“I became a vegetarian for a boy a long time ago. I didn’t eat well and carb loaded like crazy and was always on the hunt for fake meat products to enjoy. While I was pregnant with my first, I day dreamed of roast chicken a lot. After she was born the thought remained and I had some and haven’t looked back. Restaurant menus in Halifax have definitely changed but I must admit that I got sick of vegetable penne and portobello mushroom everything a long time ago. The small plate sharing thing is lovely but I must say some cheeses and nut packed salads would be good too” – Sarah (my friend)

“Like Erin, I always kind of thought it inevitable that I’d become a vegetarian. Luckily the whole family went vegetarian while Erica and I were still teenagers so the switch was pretty easy since our mom was doing all the real work. Twenty years in I’d say my primary motivation is environmental with my health and animal welfare as happy secondary benefits. As for finding meat-free options in Halifax as we have discussed I think the new crop of restaurants has really dropped the ball (2 Doors Down being an exception). And my number one pet peeve is salads with meat in them – so unnecessary!” – Amanda (my friend)

*I went back to eating occasional seafood when I was pregnant with David (low blood pressure and iron + an emergency trip to the hospital can shake you up). I figure it is better for the economy to eat seafood in Nova Scotia so I do – just don’t make me boil a lobster.

2 thoughts on “the meat on the street”